I took part in this years Game Design Deathmatch at my University - a Game Design Competition that runs over the winter holiday. It’s the first time I’ve tried my hand at making a game, and I gotta admit, it was a lot of fun! I decided to use Game Maker, a tool to help you create games.

The game is called Goo Goo Ka Ka, and is a two player game where one of the players is an eagle, the other is a baby. The aim of the game is to win (duh!). For the eagle, this means it needs to capture the baby before time runs out. For the baby, this means it needs to avoid getting hit by the eagle. They each have special power up tools that they can use to help them beat their opponent, such as dropping blocks to reduce the babies path, or firing milk rays at the eagle.

Below are some screenshots of the game. Click on the image to get a better/realistic idea of what the game looked like. 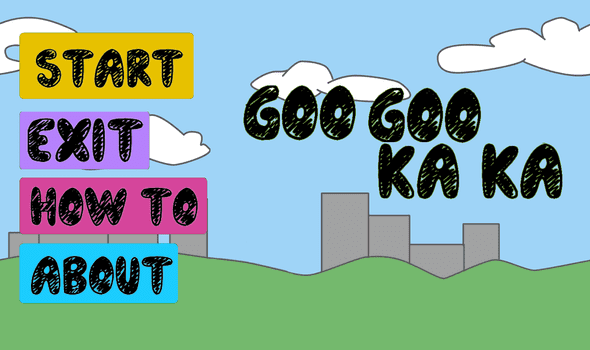 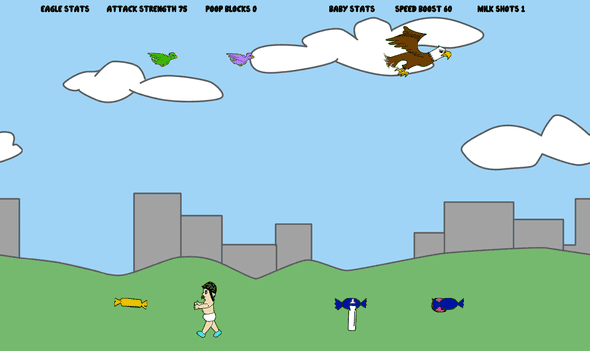 I’m not a big gamer, and don’t know too much about “general game playing rules” (such as controls should be WASD), so making this game was a pretty interesting experience. I guess it’s more geared towards a “younger” audience? I can definitely say that images/graphics and sounds really make a difference when creating a game! I had decided to approach this game with the “code it now, add design etc. to it later”, and it worked well for me. However my game started looking like a bunch of round circles on the screen. After I added the graphics and sounds, it looked a lot better!

I must say a huge thank-you to my friend Amrutha who helped me with the graphics! If it weren’t for her, I probably would have had to draw them myself, and my drawing skills are not the best. Other credits go to dafont for the font Call Me Maybe, as well as CC Mixter and Universal Soundcloud for the music.

If you’d like to give my game a try (I’d really love some feedback incase I decide to make another game in the future…) please do! You can download it at the following link. Please note that the game can be downloaded in one of two ways: